Impact drivers are different because they use what is known as rotational hammering function. The best way to explain it is using the following example:

Imagine you are trying to loosen the lug nuts on your car wheels. You are using a large wrench to try and twist the bolt off, but it has been screwed on so tightly that it will not budge.

This tool does not rely purely on the spinning mechanism (RPM) to screw or unscrew, it has a hammering function, not to be mistaken with the hammering function on a hammer drill, which kicks in when things get tough.

This hammering function also greatly reduces the risk of stripping the screw head. When you only have high RPM at your disposal, the screwdriver bit starts to slip and eventually strip the screw head.

The internal hammering function in an impact driver is what makes it so efficient at fastening and unfastening, driving screws into wood and various other materials. This is the basics of how an impact driver works. 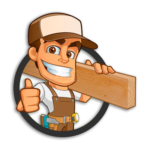 Arthur Allen has been using all sorts of power tools for the last 27 years, gaining a lot of experience on how they work, how to determine what makes a power good, and becoming an expert on the subject through many years of real world trial and error. Not only is Arthur and expert in tools, but various building jobs as well.